​​The Family: The parents of George A. Bonelli (1869-1933) were Daniel Bommeli of Switzerland, and Ann Haigh, an Englishwoman.  They met aboard ship in 1860 on their way to America.  The Bommeli family name had been changed by Daniel’s father (Hans Georg Bommeli) in Switzerland when he became a Mormon before they emigrated in 1857.  After much difficulty, Daniel and Ann founded the town of Rioville, Nevada Territory, a town that once sat beneath the waters of Lake Mead when it was full; now building foundations can be found there.  Rioville is where George and his six siblings were born, and several died--one brother as a result of a rattlesnake bite.

George was college-educated and, like his father, entrepreneurial by nature; he became a major cattle rancher in Mohave County with 250,000 acres of lush, spring-fed grassland to graze his herds.  Effie and their children were fully involved in these pursuits and, to the cattle business they added four successful retail shops.  They were actively involved in church and civic organizations of the community.  “Wealthy but grounded,” might be a good synopsis of the Bonelli family life and times in Kingman.

Effie Ellen Tarr (1875-1961) was the daughter of W.A.L. Tarr and Addie C. Wyman.  Mr. Tarr was the Santa Fe Railroad station master in Kingman in the early 1900’s.  Effie, an energetic and progressive young woman, was employed at the Kingman railroad depot as telegraph operator for two years before she and George were married.  The couple became parents of nine children while living in their first house, one of whom died in 1905 (Alfred) during a scarlet fever epidemic.

Each of their eight remaining children have made their own unique mark in history.  Though most moved from Kingman to live in other places, the Bonelli House remained the epicenter of happy family gatherings for two generations, including the centennial gathering in 2015. The Bonelli’s seventh child, bachelor Joseph (1907-1974), was the last of the family to live in the house.  With the help of his nephew, Ben Bonelli, an attorney in San Francisco at the time, Joseph and the City of Kingman reached agreement for the sale of the Bonelli property.  Escrow closed at the end of December 1973; the contract stipulated that the house and its grounds would be properly maintained and placed on the National Register of historical sites.​

The Restoration: The City of Kingman, in cooperation with the Daughters of the Mohave County Pioneers, turned the Bonelli House

into a museum as part of the United States Bi-centennial Project. In April 1975, it was placed on the National Register of Historical Places and the first floor of the house was opened to the public in 1978. But it took ten more years (1988) before the second floor would be furnished sufficiently to be opened for tours.

In 2008-09 the interior walls and exterior wood trim were repaired and repainted, display items were cleaned or restored by Kingman volunteers; in 2014, with a generous donation by Bonelli family descendants, the air-conditioning system was replaced; and in 2015, in partnership with the City and County, a centennial open-house was held to celebrate the completion in 1915 of both the Mohave County Courthouse and the present Bonelli House.  Maintenance and further restorative projects are scheduled and will be completed as funds and helping hands become available.​

The Features: Three antique clocks grace the house with historic significance and quality craftsmanship of the day.  In the living room, the Waterbury Regulator clock (circa 1890) was the first such timepiece in Kingman.  Purchased used in Chicago by George Bonelli in 1893, it was put on loan in the Santa Fe Railroad depot office until Mr. Tarr retired.  Also on display in the house is a Kroeber kitchen/mantle clock (1874), and an Iconic Ingram Calendar wall clock (circa 1884) which boasts an interactive mechanism between its two (timepiece and calendar) faces.

The original kitchen stove appears ready for use, along with the original twenty-gallon hot water tank.  The Bonelli family was privileged to enjoy indoor plumbing with hot and cold running water at a time when most homes in the community utilized outhouses, and hand-pumped cold water was brought in from outside. ​ Coal was their fuel (for cooking and heating) and Effie, a superb cook, was known especially for her gingerbread treats and fresh fruit pies. 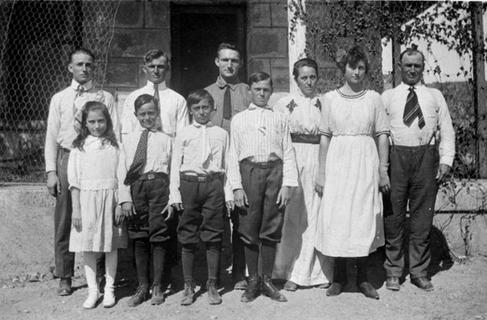 The House Today: Located at the corner of 5th and Spring Streets, this second home built by George and Effie was completed in October 1915, after nine months’ labor.  Now preserved and protected under the care of the City of Kingman, the house provides an excellent example of Anglo-territorial architecture, as well as the lifestyle of a prominent Arizona family at the turn of the 20th century.

Stonemason, Mr. Prendergast, used a local volcanic-mix stone for its thick exterior walls and on the inside a fire-resistant mixture of plaster and lime was applied to its lathe-and-plaster walls.  To increase the aspect of fire safety, George and Effie designed their home with exit doors to the veranda in each room, on both levels.  A five—point system of passive air-conditioning was provided: (1) Leafy vines, growing on chicken wire stretched from under roof eaves to anchors in cement on the three-sided veranda.  This shaded the stone walls from the direct sun; (2) the cupola, which sits atop the roof, served as their hot air chimney; (3) inside, an exit for that hot air was by way of an opening in an upstairs bedroom.  That's three-- so you must visit the Bonelli museum house to get the rest of the story!  The cupola (see photo below) was also used as a look-out for the Bonelli boys at play…girls were not allowed.​

The original Bonelli House was built in thirty days at the end of 1894.  George A. Bonelli paid $40 for the corner property on which it sat in downtown Kingman.  It is now part of the City Complex.  This original house was a gift for his bride, Effie Ellen Tarr, who he married on January 1, 1895.  Their wedding took place in the Methodist Church directly across the street.  George’s penchant for the latest innovation drove him to install electrical wiring in their two-story, wooden home.

Twenty years later on January 29, 1915, a suspected electrical short in the wiring on the second floor destroyed the house.  All escaped to safety but the Bonelli family lost most of their possessions.  The few items that did survive were left for the museum and are now on display in the house.​ 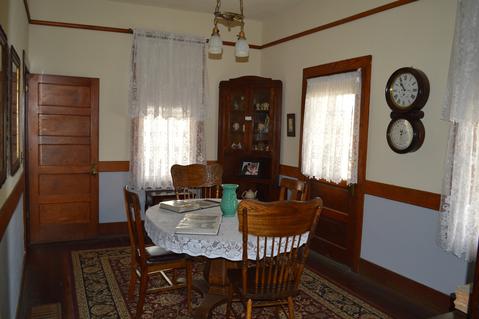 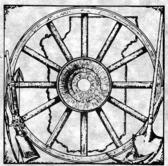 The Furnishings: The Bonelli House is furnished with period pieces (circa 1900-1950) comprised of original items as well as items donated by individuals, organizations, and businesses in Kingman.  Clothing and accessories, many that belonged to family members, art, crafts, and collectibles; books, and remnants of family treasures are all on display for the education and enjoyment of our visitors.  Most rooms are arranged and furnished with information gathered from family members who visited the house and remain involved from their far-flung locations.

The Bonelli House attracts visitors from around the world who while on tour learn of life in Mohave County, the ranching business, and how the family spent evenings together on the veranda or inside, where music, games, and conversation filled the air and Effie’s good food drew folks in from all directions.​ 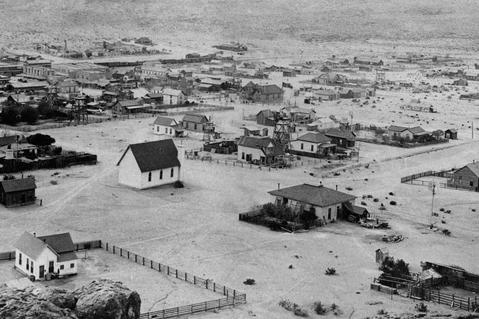 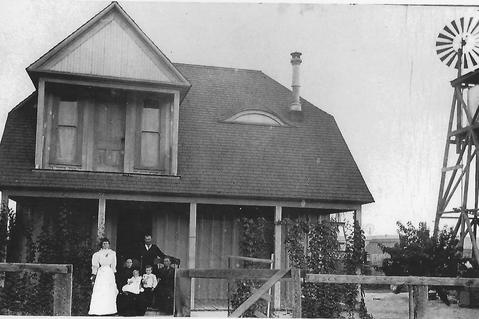 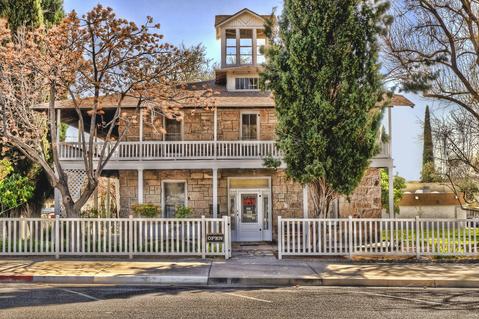 ​​See the House: Tour guides are at the House weekdays to conduct twenty-five-minute tours, provide historic background, share stories, and answer questions about pioneer life and activities of the day.​ 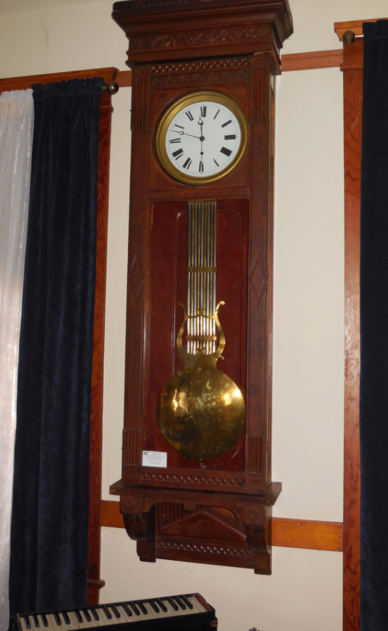 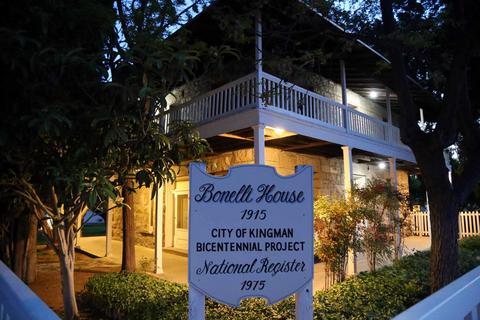 A peek at the past…preserved for the future.​